What happens to our spirit, when we constantly wake up in fight or flight? Kisos explores how the collective trauma of the world haunts us day to day in, “Bloodshot.” 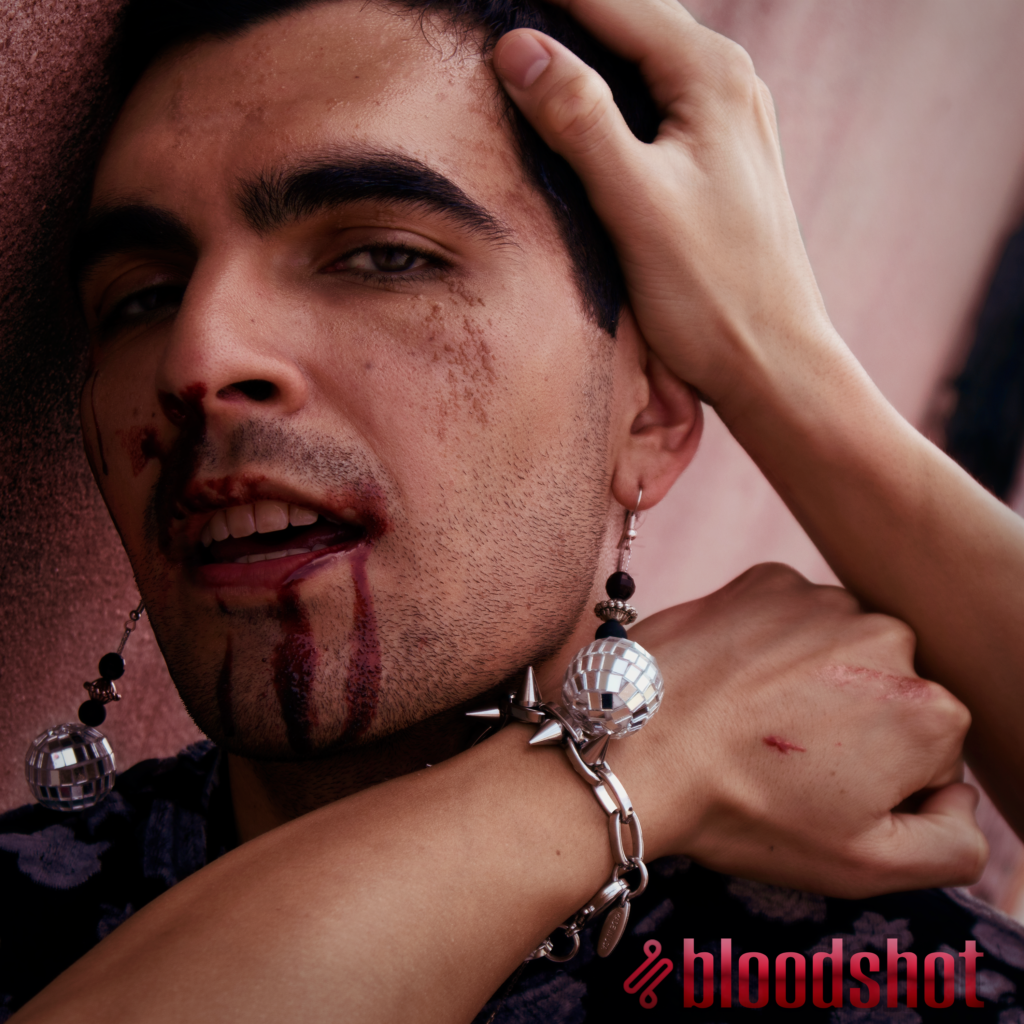 Kisos comes from a family who couldn’t care less about music. While his friends jammed to all the modern hits, he was stuck in the car with 98.3 KUIC, lite rock from the 80s, 90s, & today!

Over time, the Bay Area native forged his own path. He learned flute, competed in drumline championships, and honed his voice with his university’s gospel choir. Yet through all that, he never considered music as a viable career for himself.

In 2014 that changed. Spurred on by his grandmother who asked why music wasn’t a part of his life anymore, Kisos moved to New York to pursue a dream he didn’t know he had.

He debuted his first single “Symmetry” in 2016, which Baeble Music compared to Troye Sivan and Years & Years, and followed that with a self produced EP, VOICES, in 2018. 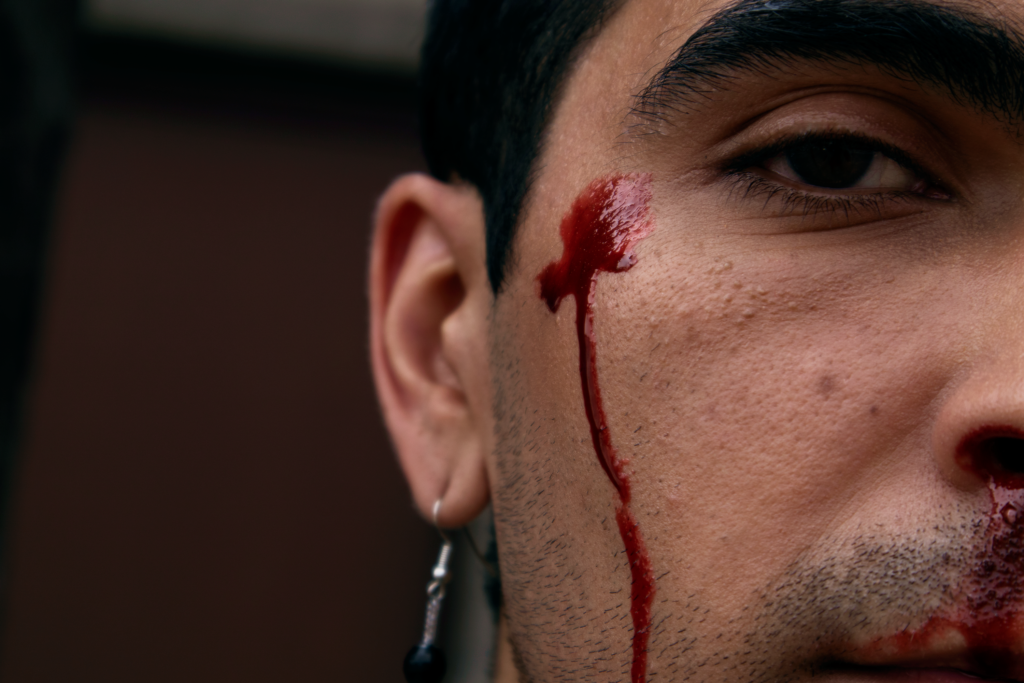 Since then Kisos has dominated livestreaming, peaking in the top 1% of Twitch’s most popular broadcasters thanks to his LGBTQIA+, TRL-style music video show, QUEERANTINE, which raised over $11k for social justice orgs since its 2020 inception.

NYC-based artist Kisos has garnered press from major outlets including PAPER, & Billboard for his music and his LGBTQ+ music video showcase, QUEERANTINE. The show is a semi-weekly event that began raising money for charity during the peak of the BLM movement in 2020, and has since collected over $11k in donations for various social justice orgs. But somehow the more they raised, the less holistic change felt possible.

About the song, Kisos says, “‘Bloodshot’ encapsulates powerlessness in the face of a murderous, bigoted society. You can raise money and speak up, but it never feels like enough. Add on fading relationships and isolation, and living begins to feel pointless.” The song features Kisos playing a native instrument of his Armenian heritage, the duduk, to amplify that wistful longing for an unattainable peace.

His new single “Bloodshot” goes beyond his past heartbreak fare into deeper societal issues and grapples with intense loss and shifts across society and his personal life.

It starts with a sample of the neighborhood Kisos lives in, then a soft melody from the Duduk leads us directly to his tender voice. An acoustic guitar accompanied him, and the instrumental builds up from this first verse to the chorus. The emotional power behind the chorus is easily felt, and the catchy vocal melodies reel us in.

The second verse continues to deliver this raw lyricism and vocal delivery. The bridge strips some of the instrumental and faces us with an acoustic guitar and Kisos’ vocals, leading back into the chorus with unforgettable vocal runs that solidify Kisos as a powerful singer. Kisos knows how to write a song and deliver, and this song is proof of that.

I had the chance Kisos about his new single, check it out below!

Was there any musical inspiration from other artists that helped influence this track?

That’s a great question! I don’t usually moodboard songs or set out to emulate anything specific I’m hearing, but I’m sure it sneaks in. I feel like this track has elements of one of my faves Saro and some big percussive pop of Loreen, plus some signature moments from my co-producer GESS whom I love. Mostly though, I knew I wanted to add a hint of Armenian flair since it’s a side of my heritage I’ve started exploring more. The song starts out with me playing an Armenian duduk, and it flows in and out, adding this somber, sexy tone.

What was your favorite part about making this song?

It’s been a while since I felt like I could write what I truly wanted to. All my last music was heartbreak heartbreak heartbreak, and honestly I didn’t mean to release them. I wrote the songs for my own therapy and later figured, well they’re done, might as well share them.

With Bloodshot, I took advantage of that freedom and brought a more pure form of my soul, excitement, and vision than I was able to with some of my past releases. I knew I wanted this to be a breakthrough track for me and push my all into it, so there was this electricity to it from the start.

Who produced this track?

I’m so glad you asked!! I started writing this song a year ago, producing bits and pieces and eventually hit a wall like I always do, where I’m out of fresh ideas or too frustrated at my skills not being able to deliver my ideas fully.

I reached out to one of my favorite artists GESS to co-produce with me and bring a new level of moodiness that I knew the song was thirsting for. The very first edit he sent was the banging drum transition into the chorus, and I instantly fell in love. All the inspiration flooded back from there and we whipped out some more new elements to fill the track out.

Where did you record this song, and what are the vibes in the studio like with you?

I record all my music in my room! Mama needs to save money lol soon I’ll have a basement area to call my own and make my music factory. Recording vibes with me are definitely fun, silly, but disciplined as well. I take music very serious and am pretty opinionated and direct when I need to be, so I always wanna be encouraging, but at the end of the day, I want it done and I want it done right! It needs to have those “wow” moments and emotional pull or I’m not interested.

Was this release cathartic to create?

Extremely, like I said before, I feel like I’m finally able to have true, full expressive freedom, amplified even further by GESS and Gavin Bradley (who mixed/mastered the track) as collaborators. I feel like this is the closest I’ve ever been to creating something that is fully the Kisos sound.

From a writing perspective though I think I was in too dark a place for this to help me feel “better” in a traditional sense. It was venting about this ongoing dread and relentless tragedy we face every day in society. If anything I looked forward to the day the message could be a vessel, and I could connect with other people feeling hopeless, alone, scared etc, moreso than it helping me in the moment.

What keeps you motivated?

All my friends!! I’m beyond grateful for everyone who listens to and supports my music. Gotta shoutout the royal stans Tina and Mickel, but also all the friends I’ve made through Twitch streaming, my business partner Cory Stewart, and countless others who make me feel seen, heard, and valued. I really don;t knwo where I would be if I hadn’t found community in this industry.

Definitely want to do even more with my signature projects, QUEERANTINE, an LGBTQ+ music video show, keep growing my new podcast OK GREAT, which Cory Stewart and I cohost every week, and of course new music, videos and more! I want Bloodshot to have an Old Town Road moment, so I’m planning a ton of fun stuff for it!

AND if anyone reading this is in the NYC area, I’m performing live in Brooklyn Oct 2nd at 3 Dollar Bill with an all queer lineup including me, Zach Benson, Bentley Robles and Gregory Dillon. Get ya tix!!

Such a bittersweet question because I always have too many people I want to shout out!! The last week my tops have been

Anaiis- this is no longer a dream

Thank you for taking the time to answer those questions for us, Kisos!

Be sure to stream “Bloodshot” by Kisos on all platforms now, follow him on all social media, and watch the lyric video below!

Catch him perform live at 3 Dollar Bill in Brooklyn Oct 2nd, and stay tuned for music videos in the works as well!