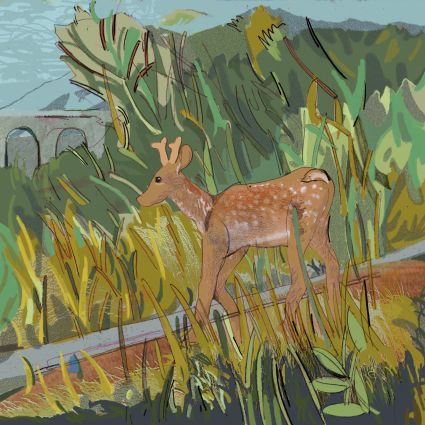 Okay Embrace’s ‘Drought (Song of California)’ is patient, well-composed indie rock with a potent, pointed message. This “is the new project of Los Angeles-based songwriter and guitarist David Schaefer,” who “has been a part of the DIY music scene in Los Angeles since his early teens,” he says, “collaborating with other artists such as Phoebe Bridgers and Girlpool and previously releasing music under the name French Negative.” Clearly, this guy is a veteran composer and a talented band leader, but the whole squad behind him is what really allows him to pop. Schaefer’s heartfelt lyricism is expressed well through his smooth, dynamic voice. It works in perfect conjunction with his tearjerking, jazzy guitar solos. The self-reflective, personally-oriented take on a grander topic put forward here, in addition to the fuzzy folkiness of the project, is reminiscent of groups like Pinegrove and Uncle Tupelo. This is a really impressive piece of work from a promising band. Check out ‘Drought’ below!